On 26 July the Daily News is put to bed for the last time. It’s gently folded into Packer’s Telegraph, whose editor explains that “neither readers nor advertisers have responded” to the sinking daily’s numerous appeals for help. Did Packer ever want to keep it going? Or was he only interested in its presses, Linotypes and stones? [RED, page 141]

Putting a paper “to bed” was a printer’s expression for what these days might be called “rolling the presses”—the act of printing a newspaper. The phrase made more sense when newspapers were printed from “flatbed” (not cylindrical) presses. In 1940 the Sydney Telegraph was owned by Frank Packer, grandfather of James Packer, a casino billionaire.

The Labor Daily changed its name (probably to improve sales) in December 1938.

Called the Labor Daily from 1924 to 1938, then the Daily News, this paper was in 1940 struggling to survive. Its financial problems had begun at least two years earlier, and Madeline Wood’s letters in this period mention several times that the staff would be sacked on Friday, then re-hired on the following Monday, when money could be found to pay their wages. The Daily News was now a poor starved thing of four news pages, eight sports pages and two for “women’s interests”.

There were several rumours that the paper was about to be closed, or otherwise sold. Rupert Lockwood later claimed that “Early in 1940, the Japanese proposed to buy the Daily News, a Labor Party paper formerly known as the Labor Daily. Through the robberies of J. T. Lang and other corrupt Labor Party men, and a boycott imposed by advertisers when the Daily News took a progressive line early in 1940 [when the Industrial wing took over the paper from the supporters of Jack Lang], the paper was in serious financial difficulties.” (Rupert Lockwood, Document J, p. 8, Royal Commission on Espionage; 1956–7) Lockwood provides no evidence for the Japanese bid, but the paper owed thousands of pounds to Lang, its former owner, and was deep in debt.

At the time both Bill Wood and Rupert Lockwood, later to become well-known Communists, were writing opinion pieces for the Daily News. Wood’s column, “World Comment”, was mostly on the war news from Europe; Lockwood’s pieces were more wide-ranging. Wood and Lockwood had joined the State Labor Party, an ALP breakaway group.

On 23 April the Federal Minister for Information, Sir Henry Gullett, accused the Daily News of being run by Communists, in answer to a question in Parliament:
“‘I am informed that the Daily News … is under direct Communist control.’
“Mr. Ward (Lab.): ‘That is a lie.’
“Mr. Ward withdrew and apologised at the direction of the Speaker.
“The Leader of the Opposition (Mr. Curtin) : ‘It is not under Communist control.’” (Canberra Times, 24 April 1940, p. 5) 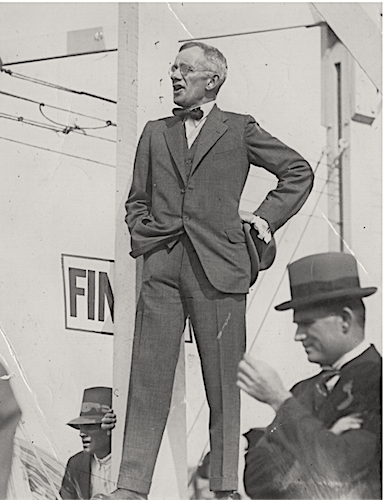 But when Gullett suppressed nine communist papers four weeks later (24 May), he chose not to touch the Daily News. The paper was instead put under pressure, not from the conservatives in Canberra, but from the NSW Labor government led by William McKell, as explained at the time in one of Madeline Wood’s letters: “… the [NSW] Government objected to some leading articles in the Daily News and last Friday [17 May] influenced the Bank [of New South Wales—now called Westpac] to hold back the money for salaries—so no one got any money. On Monday [20 May] McKell made a speech stating that Labor was whole-heartedly in favour of helping [win] the war. This speech was sent to the editor of the Daily News with the statement that if they would write an editorial supporting it the money would be forthcoming for their salaries, otherwise it would not. So Bill was deputed to write the article in question. It passed muster, and the salaries were paid. He said they were all thanking him for saving the situation. Pretty tough luck considering Bill’s views.” (Madeline to Fred Wood, 22 May 1940) Bill’s views were pacifist, as were most of his family going back at least three generations. The article was actually printed twice: “Bill’s leading article of May 21st was reprinted in today’s issue of the Daily News—to prove their loyalty to the war effort of the government.” (Madeline to Fred Wood, 29-05-40) Wood’s article is headed “Where Labor Stands”. The wording is careful:

“Australian Labor stands with Britain; it wants to see brutal aggression of the type employed by the Nazis ended forever.” However, “There will be no let-up in the fight to stop conscription, to preserve free speech and trade union rights, and to raise the people’s standard of living. … In Labor’s eyes, the more grave the national emergency, the more monstrous is the crime of those who seek to garner a profit from it. No vested interests can be allowed to obstruct the great national effort, and that fundamentally is why the Menzies Government is unfitted to retain office …” (Daily News, 29 May 1940, p. 4)

But then on 7 June, after a number of peculiar censorship decisions such as banning Henry Lawson’s “Faces in the Street” which had been in print for decades, the Information Minister, Sir Henry Gullett, “whose administration of the post has been the subject of much criticism” is “relieved of control”. (Canberra Times, 08 June 1940, p. 2) Menzies then appoints the owner of the Melbourne Herald, Sir Keith Murdoch, as Director-General of Information.

On the evening of 20 June “Bill seems more cheerful—evidently the Daily News will be struggling on for the time.” (Madeline Wood, 20 June 1940) In fact the day after she posted this letter, the paper announced that it had been wound up and sold to the owner of the Sydney Daily Telegraph, Frank Packer.

Lockwood later blamed the Japanese and a cabal of local advertisers as well, but the chairman of Daily News Ltd, Charles Nelson, blamed the divided labour movement for the paper’s failure. No mention is made of private capital’s refusal to advertise in what was then seen as a radical journal, though the paper’s editor begged advertisers to support the paper in a full-page appeal in the same week (24 May). Nelson preferred to blame those unionists who would not buy the paper, adding that they would notice their mistake when the paper ceased to exist. (Daily News, 21 June 1940, p. 1) The following day Nelson is described as “disappointed” and “recuperating in a rest hospital”. He again blamed the paper’s failure on the labour movement’s “apathy, … rancour and division”. (Daily News, 22 June 40) The followers of former premier Jack Lang refused to buy the paper since losing control of it in 1938, according to Wood (years later, in his newsletter for 30 May 1974).

At a meeting of unions holding shares in Daily News Ltd at the Trades Hall on 11 July, Nelson said that “Everyone of any importance in the business world in Sydney was given the opportunity to conduct the paper on the same basis as the [left-wing] London Daily Herald, but one after another they dropped out. … On taking over the paper …, the then board had to pay approximately £10,000 to Mr Lang and in addition had to face a bank overdraft of £23,000. … Then came ‘Black Friday’ when there was no money to pay the staff, but through the loyalty of the staff the paper was able to carry on for a few more weeks.” (Daily News, 12 July 1940, p. 8)

“The news this week is that the entire staff of the Daily News has been given notice that their services will not be required after July 27th. [RED, page 141] 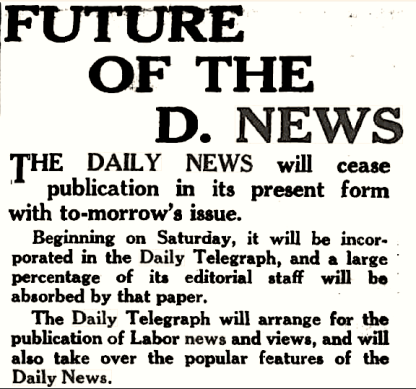 The paper’s last words were a hope that “From now on the workers of NSW will look to the Daily Telegraph for a statement of their viewpoint.”

This hope was not fulfilled.  Although Packer kept “Daily Telegraph and Daily News” as its front-page masthead until the 1950s, the paper’s policy had become uncompromisingly anti-Labor as early as 1949.

Paul Moline was one of several communists who were working for Packer’s Telegraph in the 1950s (at the peak of the Cold War) when the paper was attacking communism abroad and at home. The strangeness of this situation is discussed later in RED (pp. 377–8).

Decades afterwards, Bill Wood reflected on the death of Australia’s only Labor daily. “The ALP politicians fear any activity they don’t control. Lang killed the Labor daily paper when he lost control of it in 1938 and Curtin refused to revive it in 1940 for the same reason (we were working on it at the time). See Lloyd Ross’s Curtin Memorial Lecture.” (Bill Wood in his newsletter, 30-05-1974) Ross’s lecture was given in 1970. The passage Wood had in mind is this:

“How little we trust one another! . . . How little confidence we have in one another!” Curtin said this to me in Canberra, when I was seeing him on a forlorn mission to seek aid for the Labor Daily in Sydney. He was never worried about the enthusiasms of youth. He knew the curious financial condition of the Labor Daily. He hated Lang; but was not prepared to provide money, even if he had any, for a paper being administered by a medley that included the Bank of New South Wales, communists, the inefficient, and the doubtful. He did not want to talk about the Labor Daily. “I’m under the weather,” he said. “I became leader too late. Too late, Lloyd. It’s too late now. I could have done the job years ago, but now I’m tired—too exhausted to fight crooks inside our party. You are in favour of sanctions, I know. You’ll only split the party and do no good. It’s not worth another split. What about the racketeering element in New South Wales? Do you think the Labor Daily is worth saving? How little patience we have with one another. . . . How’s your Mother? . . . Good luck.” Scullin entered and Curtin recovered his confidence. He gave me a book, Co-operation or Coercion? by L. P. Jacks. The inscription reads: “John Curtin, October 1938, to Lloyd Ross, in memory of years when youth was in the ascendant”. (Lloyd Ross’s Curtin Memorial Lecture, 1970)