And then, the work complete, they stand, “the establishment in evening dress”, while the orchestra performs God Save the King—and then, another kind of joy—the Internationale. Paul has come for this as well: the Communist anthem played by an Australian orchestra. He feels his optimism fill the hall, although the ones in evening dress stay silent. But listen: among the loudest in the audience, and the ones who know the words, are some in uniform:
.     “The Internationale,” these boys in khaki sing, “unites the human race.” [RED, page 241]

By this time (1943) thousands of Communists were fighting in Australia’s defence forces. This seems to be an unusual and largely forgotten twist in our history, because it is difficult to fit together with what happened before and (more particularly) after the war. For these brief few years (1941–45) Australia was an ally of “Communist Russia”. This unprecedented admiration for the Soviet Union was a reflection of a genuine wartime anxiety for our own safety. And it led to some curious paradoxes, such as the Communist anthem being played at symphony concerts. George Farwell remembers “the establishment in evening dress standing” for the Internationale at concerts in the Sydney Town Hall, c. 1943 (Rejoice in Freedom, Nelson, 1976, p. 213). Deep conservatives sang the praises of the Red Army in both the parliament and the Press. Meanwhile Australia’s Communist Party vigorously opposed factory strikes. Neither of these unlikely positions outlasted the war.

In 1941, the conservative Billy Hughes hoped that all Australian Communists would “stand at my right hand”. The “Tory” Sydney Morning Herald found itself calling Stalin (or more plausibly his armies) “brave” and “gallant” (for example SMH, 21 October 1942, p. 6). Frank Packer’s Australian Women’s Weekly could place a smiling portrait of “Uncle Joe” Stalin on its cover in May 1945. (RED, p. 241) 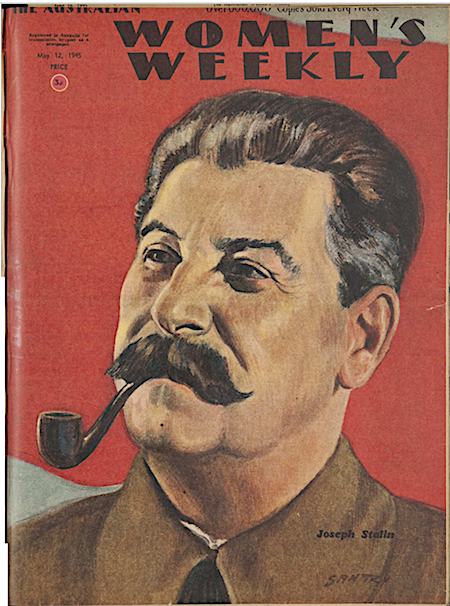 The cover of the Australian Women’s Weekly, 12 May 1945, at the end of the European war.

Public buildings such as Sydney’s GPO were asked by the Curtin government to fly the Soviet flag—the hammer and sickle—on days commemorating the Soviet Union and the Red Army. (RED, p. 244) Here it is: 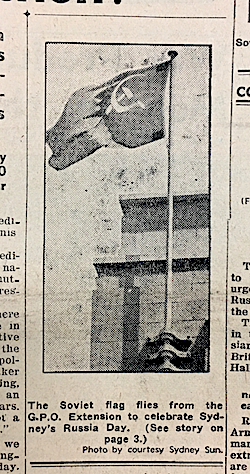 From Progress, October 1941; this photograph first appeared in the conservative afternoon paper the Sydney Sun.

By “special request of the Prime Minister [Curtin], the Red Flag had been flown from the Sydney Town Hall, the General Post Office and other public buildings.” (Edgar Ross, Of Storm and Struggle, p. 93) This was only a few weeks after Curtin became prime minister (Barrier Miner, 07-11-41, p. 1). Meanwhile one of London’s most exclusive hotels, the Savoy, put Consommé Stalin on the menu.

And the journal of the Australian Broadcasting Commission, the ABC Weekly, portrayed the Russian armies in admiring terms, not unreasonably, as they were in 1942 the only armies fighting Hitler in Europe. 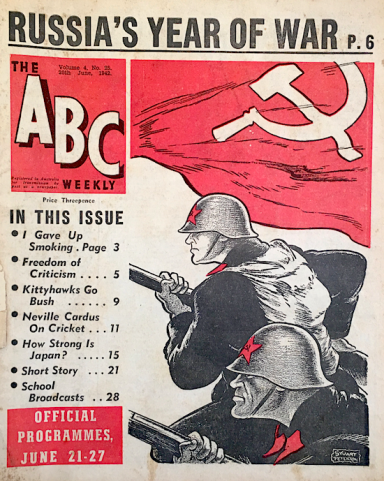