.Les must ask permission from the Central Committee of the Communist Party. The two most senior men, Miles and Sharkey, lead this committee. They learn about her plans to marry and they expect to be consulted. She doesn’t question their right to give advice, if not permission. Her marriage is personal but political as well. Miles and Sharkey need to weigh the matter. Is it in her wisest interest? And in theirs?
.Both are small men. Miles is a Scot in his mid-fifties. Though in public he can seem harsh, in private he is milder, and somewhat disadvantaged by a hearing-aid. Sharkey, ten years younger, ex-Catholic and ex-country, is red-haired, stocky, muscular, a pugilist. [RED, pages 252–3]

An unsigned drawing of Miles in Mitchell Library plays up the surprising assessment of him by an ASIO officer: “a kindly little man, ageing and whimsical …  [who] still holds the fire of battle in his eyes. They are sharp, brilliant and magnetic, …”. (Quoted by Stuart Macintyre in ADB.) 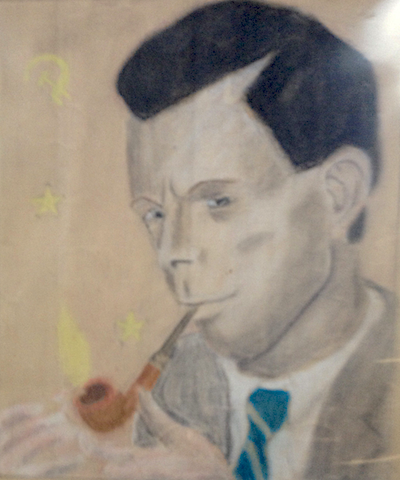