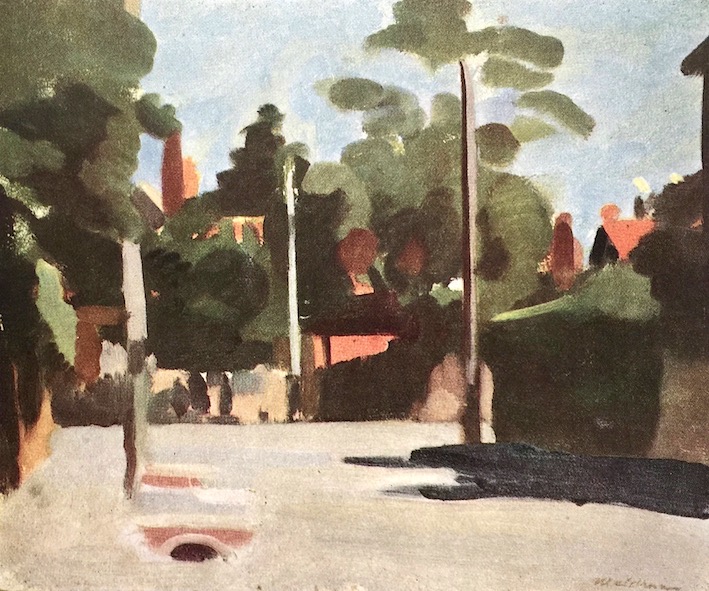 St John’s Parade by Max Meldrum [From The Science of Appearances, plate 38]

Veal walks the full length of his narrow studio because this is the only way to paint. It is Max Meldrum’s way. Examine the subject from a distance. You are objective. Detached both from the subject and yourself. The artist, Meldrum says, is a scientist of appearances. …

They’re not engaged by colour. “Colour captivates the vulgar,” Meldrum says. Instead of colour, they attend to differences of light and dark, which he calls tone. It’s tone that “gives the illusion of depth,” Veal explains. [RED, pages 56, 59]

Max Meldrum taught Clarice Becket and his method was influential especially in Melbourne in the twenties and thirties. Reacting against the French impressionists, Meldrum insisted that artists should begin a painting by breaking up what they saw into three to five tones (from light to dark). This, he said, created the illusion of depth. His book, The Science of Appearances (1950) was an attempt to explain this. For example, before painting the picture at the top of this page, St John’s Parade, Meldrum says he “analysed” the light into three tones:

[From The Science of Appearances, p. 87]

This is the key to his approach, and the basis of his claim to being objective and analytical, in short a scientific artist.

Meldrum was influential among those painters who scorned or were puzzled by “modern art”. In Australia at the time “modern” included the French impressionists. In the nineteen-twenties and thirties most art books could only reproduce paintings in “black-and-white”. Australians rarely saw impressionists in colour. This made it easy for Meldrum, in his first book Max Meldrum, his Art and Views (1919), to reproduce (upside-down) an impressionist painting in grey to “prove” that French impressionists could not paint “exact transcriptions of Nature”.

Meldrum’s views were political as well. He saw the modern artist as the economic dependant of “business men” with private collections (Max Meldrum, p. 14). The private buyer chooses, recognises, commissions and elevates the artist. Meldrum saw himself as virtuously outside this system, though he did accept commissions.

These views helped Meldrum to be popular among socialists of the time. He was when young a cartoonist for the socialist monthly Champion, then became “a pacifist during World War I; a supporter of the anti-fascist movement in the 1930s and of disarmament during the Cold War.” (Goad et al, Modernism and Australia, p. 662)

Max Meldrum, self-portrait [From The Science of Appearances, frontispiece]

My mother’s favourite story about Meldrum was not about his painting but his analytic intellect. The story came from Hayward Veal. The scene: a long back yard in Melbourne. The master sets up his easel in the plein air and a subject is arbitrarily chosen (bottles on a table make “an interesting set of patches”). The board of Masonite is screwed to its lightweight easel, the metal case of paints is snapped open, and a fistful of brushes as practical as arrows are snatched up. The master looks from subject to board to subject, and again, and back again. Silently he’s analysing: where are the lightest, the darkest, and the middle tones?

Minutes pass. So is he ready to begin? His students stand about, their eyes on the teacher, his blank Masonite, his subject, which is just some arbitrary bottles on a wooden bench. He dwells on that subject. Currawongs call. Time slows. When will he begin? Soon the great man will select his broadest brush, and then approach the board, which is beside the subject, both at the far end of the yard, thirty metres distant.

He moves! … But no, he doesn’t move. No one dares to speak. A summer fly hesitates above the oil on his palette.

The students, whispering, predict his opening gambit. The newer students start to feel an embarrassed awe. Two exchange a worried glance (is he potty after all?) when abruptly Meldrum stops, having analysed the problem, snaps shut the metal case, slides the brushes back into their varnished box, unclips the untouched Masonite, coughs, turns, looks suddenly refreshed, instructs the nearest man to loosen and fold away his easel, and explains to the others, “Since I’ve solved the problem, what point is there in painting it?”