Progress was a four-page weekly that published radical opinion during the time the communist Tribune was banned (1940–42).

They’re in a tiny office at the back of the Trades Hall, Room 62, where they soon realise “from odd clicks and buzzes” that the telephone is tapped, and within a month Madeline carefully writes to Fred about the censorship of Progress. [RED, page 168]

This Sydney paper represented the new breakaway State Labor Party (SLP) and was produced by a handful of journalists that Military Intelligence knew to be communists. They were Bill Wood, Rupert Lockwood, John Fisher, Edgar Ross, George Farwell and Paul Moline; Len Fox took over as editor in 1941. Intelligence saw the SLP as “in effect the Communist Party of Australia re-entering the political sphere”. (R. Powell, General Staff Intelligence, in ASIO file “NSW State Labor Party”, A6122/2405, p. 2, 28 June 1941)

Unlike the censorship of mail, the censorship of newspapers was more obviously political. Journalists were required to submit all articles on the war for approval by the “Publicity Censor”, first as a rough draft, typed on a typewriter, then again as printer’s proofs.

While all newspapers at this time underwent wartime restrictions, Progress was clearly singled out for more severe redactions, as some of its “prohibited” stories were exact quotations from other (British and Australian) newspapers.

The following paragraph, for example, reproduces an opinion piece from London’s News Chronicle which was then re-published by Sydney’s Daily Mirror (therefore already published twice without interference), but “blue-pencilled” by the Publicity Censor when Progress wanted to reprint it: 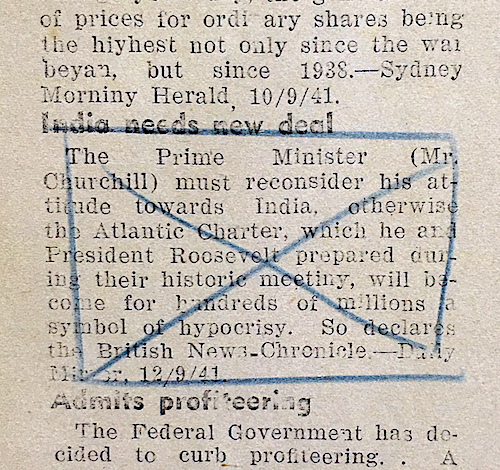 Galley proof for an item submitted by Progress to the Publicity Censor, 12 September 1941.

Other items might be “passed”, but with the Censor’s alterations. These had to be re-submitted for approval several times, with (presumably) the copy boy, called Billy, dashing between the newspaper (at Trades Hall) and censorship headquarters (82 Pitt Street) on his bicycle.

Sometimes it was left to the editor to guess what might be offensive about a “prohibited” item and rephrase it.

The next item is a notice of a forthcoming protest meeting. Some background first:

In April 1941 Greece was being invaded by Nazi and Fascist forces. The Greek Consul in Sydney “called a meeting of all Greeks aimed at organizing an Australia-wide fund to assist the war effort in Greece. An intensive campaign was launched throughout the Greek communities and … the Greek War Relief Fund raised approximately £150,000.” (D. Tsingris, “The Power Struggle between the Greek Church and the Established Greek Community Organisations in Australia”, Sydney University Dissertation, 1957) The amount raised suggests how popular the Greek resistance was in Sydney. And yet Greek citizens were being interned.

Now, this is the top half of the sheet: 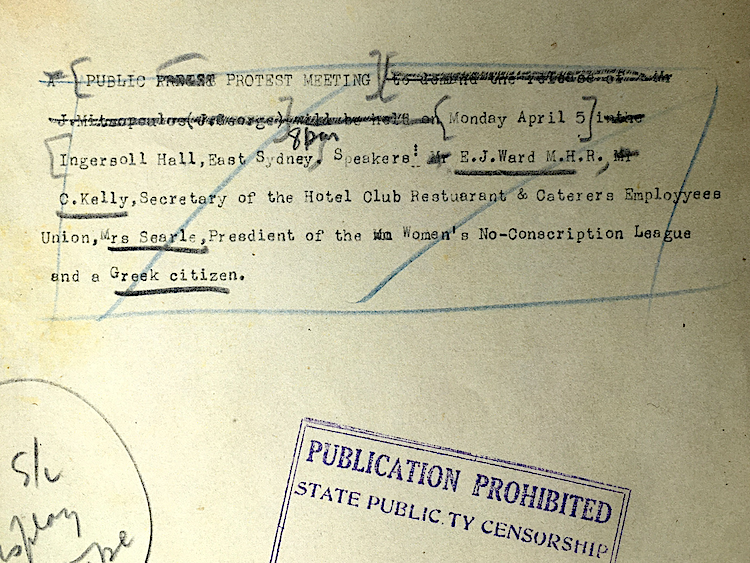 There are two hands at work here. The GREY crossings-out are by the paper’s editor, trying to save this item from being struck out altogether (in BLUE) by the Censor. The editor has crossed out the purpose of the meeting, but the Censor can still read it: “to demand the release of Mr J. Mitropoulos”.

When Billy brings the copy back, it’s “prohibited” in full. This was not unusual: items partly crossed out in first draft might be fully redacted in a later proof, making the work of editing a paper to deadline more than usually difficult.

So, on the same sheet, the editor (Paul Moline) asks Len Fox to “type out again in duplicate and resubmit to Censor”. Without the details of the purpose of the meeting, Moline hopes that the Censor (hopefully a different clerk) will let the notice slip through. 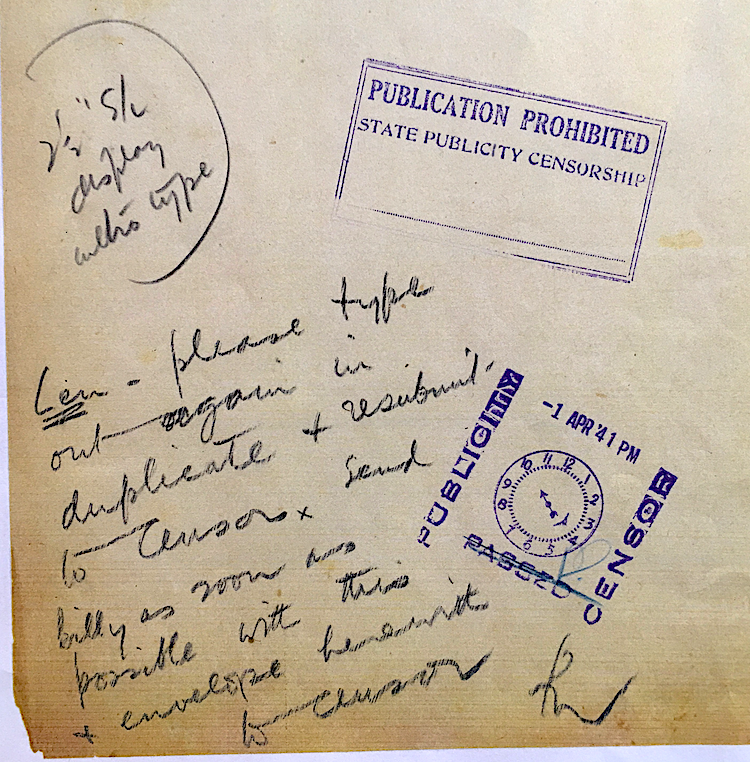 But what exactly was the offence? There was no regulation against mentioning internees. And, after all, the Sydney Daily Telegraph had printed exactly the same information two days before (Sunday 30 March, p. 6). It seems that Progress was being singled out. This outraged Len Fox sufficiently to keep this scrap of newsprint for decades (it’s now in the Mitchell Library).

Here’s another example. It shows that the Censor felt entitled to prohibit comment on the internal politics of a country not engaged in the war, even though this fell outside the Defence Regulations of 25 August 1939, which prohibited only “naval or military information … useful to the enemy; … the causing of disaffection or endeavouring to influence public opinion … in a manner likely to be prejudicial to the defence of the Commonwealth [of Australia] or the efficient prosecution of the war”. 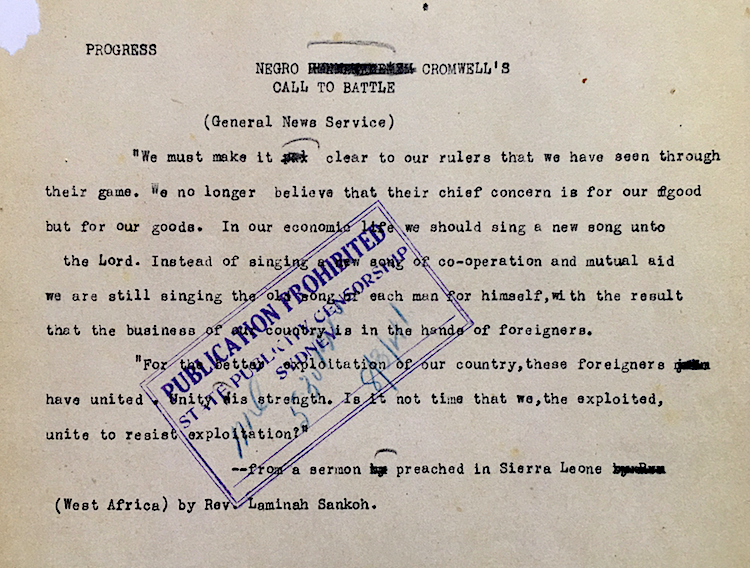 Lamina Sankoh’s sermon seems to have been prohibited simply because he is an articulate and persuasive anti-colonialist: “Instead of singing the new song of co-operation and mutual aid, we are singing the old song of each man for himself.” Lamina Sankoh went on to form the People’s Party, which is still one of the main political parties of Sierra Leone. So why would an Australian government prohibit these remarks?

More obviously awkward for the Menzies government, the next item is about trade with the militarist Japanese empire. In 1941, ten months before Japan entered the war, Progress hoped to pass the Censor, criticising “a certain Pacific power” without naming Japan. 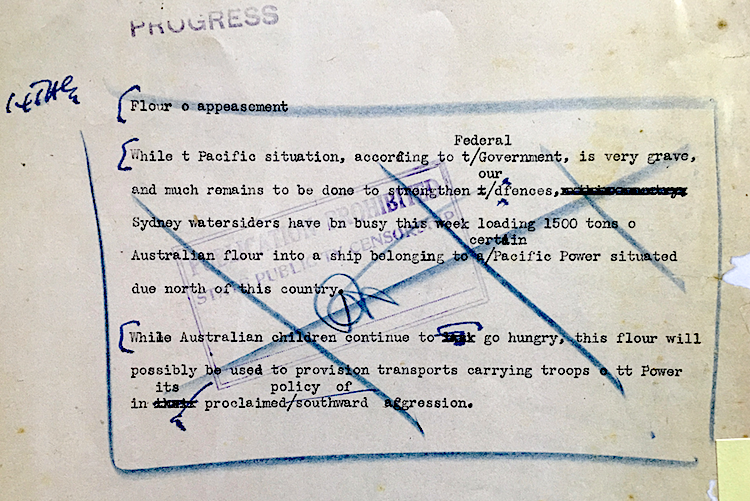 This Japan story is political criticism of the Australian government; it is not a statement of troop movements. The details of this shipment would have been known to Japan, as the trading partner involved. Japan was not at this time an enemy of Australia. The news item would have been embarrassing to the government, which was still being needled for selling raw materials (suitable for making weapons) to Japan in 1938, but it it is difficult to see how this news gives away any facts that would be useful to Australia’s actual enemies at this time, Germany and Italy.

Finally, here is an article that quotes from a leaflet produced by communists in Germany. The leaflet asks why Nazi stormtroopers have been seen dining with “the Polish gentry and hunting with them” while any association of German workers with Polish ones is banned. This seems to be a remarkable document: a political attack on Hitler from inside the Reich by communists (who were being arrested and persecuted by Hitler); the pamphlet claims that the German people “desire … a peace without the suppression of other peoples.” The leaflet is fiercely anti-Nazi. This might embarrass the government in Berlin, but not the one in Canberra. How this information puts Australians in danger is difficult to fathom. It was prohibited in full by the Censor. 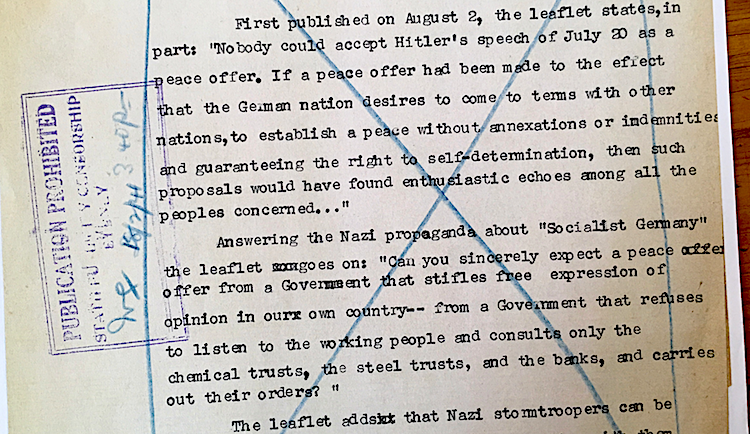 Part of the report (from London’s General News Service) of an anti-Hitler leaflet distributed at great risk within Germany (18 February 1941).

Part of Fox’s “Notes on Progress”

More on the origins of Progress as a paper for the unemployed in the 1930s is HERE.