The plot, the epic narrative, the uplifting drama turns on seven shillings. The landlord’s agent hands across to her an envelope, the information sealed inside: he can escape before she opens it. Such a small thing. Mere silver. Seven pieces. But seven shillings is impossible for them, and they’re not even poor. [RED, page 120]

This short silent film, made in c. 1939–40, protests the lack of affordable houses for rent in Sydney at a time when tenants had few rights. Landlords could raise rents and evict tenants more or less at whim. The title Take Notice! refers to an agent’s letter giving notice of a rent rise of more than thirty per cent. 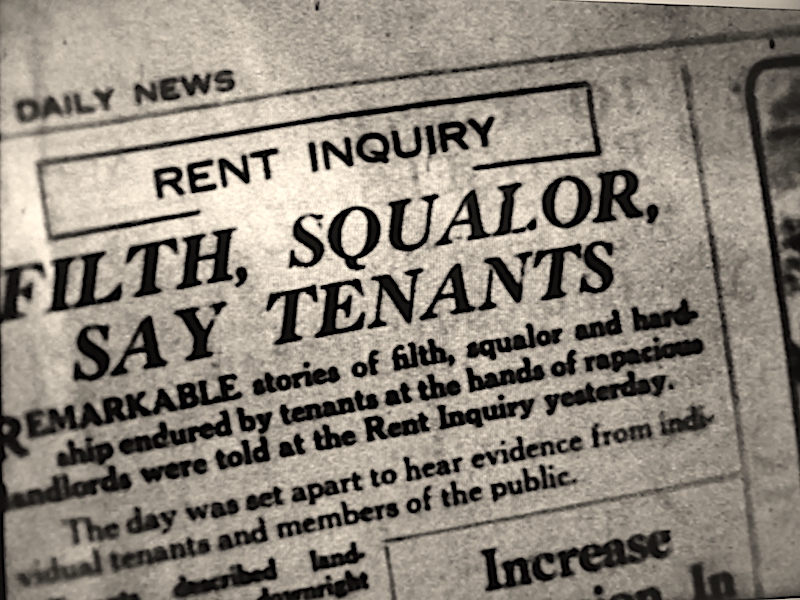 In the film, newspaper stories intercut with the action are all from the Labor Daily, for which Paul Moline was subediting at the time. Moline operated the camera (a 16 mm Bolex) and the film was directed (and probably scripted) by Eddie Allison of the New Theatre in Sydney.

The film starts with some rare moving pictures of Sydney at the time: sailing on Middle Harbour, beach scenes at Balmoral, ferries at Manly, commuters in Sydney’s streets, and so on.

The middle section of the film follows a working day in Sydney, showing glimpses of factories and docks, abruptly intercut in Soviet film-making style with road menders, dressmakers, crane drivers and other workers rarely caught on Australian documentary film from the 1930s.

The scene then changes to a campaign to raise thousands of signatures for a new act of parliament to protect renters. We see petitioners signing at tables set up in the streets, speakers in the Domain (though the film is silent), and the printing of hand-outs on a Gestetner stencil-duplicator. Take Notice! starts as agit-prop and ends in a celebration of “people power”.

This 19-minute silent film seems to be part of a campaign, run by Australia’s only Labor Party daily paper, for a fair rents tribunal. On 30 July 1938 the Labor Daily led its front page with the announcement of its own “Public Campaign” for “The abolition of eviction orders, the introduction of a Fair Rents Court [and] a government rent allowance for the unemployed. … In the last 12 months ended June 30 [1938], 4,994 ejectment orders were issued. That meant almost 100 evictions every week in New South Wales. Families turned out of their homes in Sydney are forced to live under shocking conditions. This is generally the result of a decent man being unable to get work. Without rent receipts families have no chance of obtaining another house even if they could pay the rent. Human beings are driven to the shelter of windswept tents, bagging shelters and insanitary shacks. Adequate provision must be made for an unemployed man who temporarily cannot support his family.” Rents are “soaring” ahead of wages. (Labor Daily, 30 July 1938, p. 1; 1 August 1938, p. 4) Such a fair rents tribunal was not achieved in NSW until after the war.

Take Notice! is now held at the National Film and Sound Archive, Canberra. Two extracts can be downloaded HERE and HERE, or by clicking on these images: 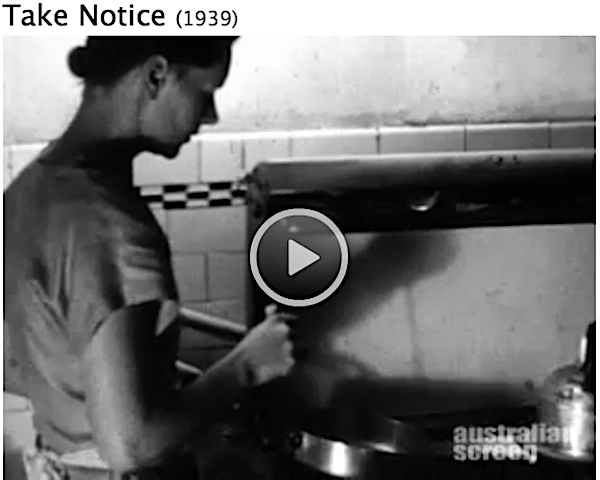 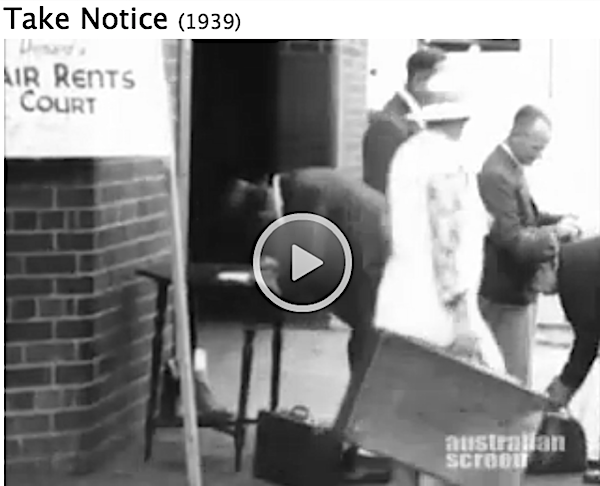 The climax is an act of reading, writing, typing, copying and distributing an answer. The world is changed first by journalists, then petitioners. They sign a simple document with two hundred thousand others. It’s victory by active journalism. The legal criminals are the unseen landlords and their agent, whose hand is glimpsed, only his hand: ruthlessly it clutches envelopes. The unseen heroes are the journalists, in whose power for good let us believe. Headlines, then whole paragraphs, fall on the screen as accusations. They too, the journos, mere men of tin and lead, might be our samurai, their sword a clattering Gestetner. [RED, page 120]

A copy of this film is available from the AFSA for educational use. You can inquire about it HERE.

NOTE. The newspaper extracts in the early part of the film showing the date (1938) are genuine ones. The clippings later in the film, such as 200,000 sign petition and Rents forced down are imaginary (set in the future). At the time (1939-40) no such rent act had been achieved.