This episode is based on an eyewitness account in Roy Dalgarno’s unpublished autobiography, The Winking of an Eye, held by his son Lynn Dalgarno. I’ve borrowed some phrases from Roy’s candid and vivid narrative:

“… the trees had been flattened, and we came to this little flat sort of sandy area where the plane had crashed down almost vertically. The engine had ploughed right into the sand, and a group of five or six figures with the[ir] Air Force overalls on—a sort of bluey grey overall—seemed to be squatting in the sand. … They just looked like strange, hunched figures sitting around on the sand.

.     “It was December, a lovely, hot summer day, and you could hear the low surf rippling in on the beach, and the birds and insects, nothing else. … No one said a word—they were shocked, silent—chaps whispering as though they were in church or as though if you spoke out loud the bodies would hear you.” There was “the absence of noise except for the insects and a buzz of flies—otherwise peaceful, absolutely peaceful.” (Dalgarno n.d., Section 11, pp. 5–7) 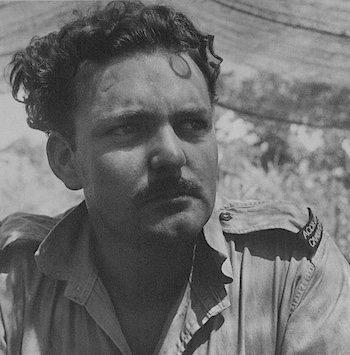 Camouflage artist Roy Dalgarno, Darwin, 1943. The words on his epaulette are “Accredited camoufleur”. Photograph by Max Dupain (from a print held by Lynn Dalgarno)

Roy Dalgarno was at this time working with other artists for a camouflage unit of the Department of Home Security. In charge of training the camouflage artists was the zoologist William Dakin, who developed his ideas for disguising equipment and buildings partly from his own observations of camouflage in animals, as explained by Ann Elias in her Camouflage Australia; Art, Nature, Science and War (Sydney University Press, 2011). The artists included, “at various intervals between 1941 and 1944, … Roy Dalgarno, Max Dupain, Ronald Rigg and Eric Thompson.” (Elias 2011, p. 6) Another artist was Roderick Shaw (Kenyon 2007, p. 9). 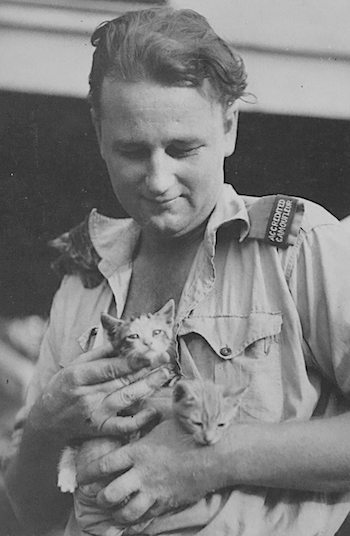 “There were seventeen of us at the peak period” on the islands where Dalgarno was assigned, including artists, photographers and architects. Dalgarno recalls that the camoufleurs’ insignia was a leopard, since their role (somewhat confusingly) was to change the army’s spots. Roy’s job was to use nets, made of an open-weave cotton fabric, and stretched over these installations. The nets were “garnished”—woven with strips of hessian “painted with … camouflage colours, green and brown”. (Dalgarno n.d., Section 10, pp. 16, 18)

A camouflaged army post with “garnished” net. Dakin comments: “Sagging net is not good, nor is there enough garnishing in parts.” (Dakin 1942, p. 35)

Local Aborigines, most brought in from the Milingimbi mission, helped with this work, paid only with food and tobacco. (Dalgarno 1984, p. 56) At this time Roy “did a lot of sketches” and took an interest in the Aborigines’ skills in collecting ochre and “making various colours” by “burn[ing] up sand and so on”. (Dalgarno 1984, p. 58)

Where did Dalgarno’s episode occur? This isn’t clear. He says the crash was “on an island off the Gulf of Carpentaria” (Dalgarno, n.d., Section 10, p. 18)—possibly one of the Wessel Islands. His camouflage unit went to “various islands” (Dalgarno 1984, p. 52). “The furthest we went up to were little islands like Wessel Island [sic]. … I was working on one of the islands …”. (Dalgarno n.d., Section 11, p. 5) He then describes the air crash on a “small atoll”, but neither the Gulf nor the Wessel Islands have atolls.